What do many top motocross and supercross racers have in common? Riding a Yamaha PW50.

I started riding on a PW50.

This Yamaha 50cc motorcycle first entered the world in 1981. At that time, it had a different name, YZinger. Since then, Yamaha has sold more than 380,000 units of this 2-stroke trail bike all over the world. It has been so successful that there haven’t been major changes to the design.

Today, Yamaha PW50 goes for $1,649 brand new. It’s still a popular bike with parents and new young riders. The main reason is its low seat and other beginner-friendly features we’ll talk about below. This bike is perfect for kids in the age range of 4 to 6. Some parents have also put kids as young as 3 year old on the PW50.

Other brand models like the Honda CRF50 and Suzuki DRZ50 compete with this bike. But PeeWee wins people over with how easy it is to ride and maintain. True to Yamaha’s original goal, it has gotten many kids into dirt riding quickly.

These top features make Yamaha Peewee 50 reputation for being a great learner bike:

I started at 5 years old. My dad was a big motocross fan, and we’ve been to a local motocross race…. So after that I asked my parents a bike all day long, and I had to wait until Christmas to get a PW50.

Here are the specifications of features for this PW dirt bike:

Curious about how the PW50 performs? Continue reading for a full review, from looks to resale value.

When it first came out in the 80s, this bike was a bright yellow motorcycle disguised as a toy. The PeeWee was manageable and friendly in name and looks. Today, it still makes the same impression, except in Yamaha’s trademark blue. And it still puts both riders and their parents at ease, which makes fear and worry less of an issue.

The overall character of this Yamaha 50’s engine is smooth. It has just enough power and pull to make things exciting for your kid. The engine does this by producing 2.6 pound-feet of torque.

The bike has no electric start. Instead, it has a kickstarter on the left side of the bike. Since kick starting is hard at the beginning, your permission becomes important when it comes to riding.

The 18.7-inch seat height and low bike weight also give your kid confidence while figuring out balance.

Even before the first pwee 50 came off the production line, Yamaha wanted this dirt bike to be easy to maintain. The wheels are mag-style instead of spoked, so there’s no need to worry about wheel tension. And with mag wheels, you also get a lighter bike.

The teeny Yamaha’s shaft drive knocks another chore off your checklist. It lasts much longer than a chain and is very low maintenance.

Yet another advantage for this bike is parts that fit well across model years. Because the PW50 specs haven’t changed much over the years, you can buy parts for a new model and fit it on another model that’s 15 years old.

The PW50 boils riding down to the basics, and makes these four things easy to do:

How? The bike is only 90 pounds with a full tank. So, a child won’t struggle to hold it up. The seat is a low 18.7 inches, which makes sure the rider can reach the ground with both feet. And if balance is a problem, training wheels are available.

Another great riding feature is the fully automatic two-speed transmission. There’s no shifting necessary. Your kid only needs to twist the throttle to go. This way they can just focus on staying balanced and controlling the speed of their PW50 dirt bike. For more on top speeds, you can read our other post on How fast is a 50cc Dirt Bike.

The controls are also best for beginners. The layout is clear, and there are no foot controls. The left lever controls the rear brake, and the right one controls the front brake. Adding to the easy ride is the soft suspension. It has two inches of travel that soaks up rough dirt surfaces.

The Yamaha Pewee 50 was engineered to be as simple and convenient as possible. It has an oil injector, which skips premixing fuel. It’s fitted with durable plastics that won’t shatter in a fall. And its 2-stroke engine delivers power in a tamed way. It feels lively, but not out-of-control.

Its bigger brother the TTR50, Honda 50cc Dirt bike – CRF50, and Suzuki’s DRZ50 are the main challengers to its continued popularity. The PW50 is still hard to beat when you look at its overall package. It’s lighter than the other three by 20 to 36 pounds. It has the lowest seat, and it’s the only one that doesn’t need shifting.

There are some cons for the Pee Wee 50 though. Because the controls’ layout is different from the other three, it might take your kid longer to adjust to a bigger bike. The wheels, while easy to maintain, aren’t as tough as spoked wheels. Spoked wheels handle bumps and jumps better than mag-style wheels, even if they need to be checked more often.

This Yamaha 50cc holds its resale value well, because it’s popular. It sells out quickly at dealerships, and sometimes has a waiting list.

This is great news if you want to sell this Yamaha mini dirt bike after a few years. It means you’ve got a potential group of buyers always eager to score one. Based on the Kelley Blue Book, 2015 and newer models can be traded in at dealership between $555 and $940. Dealerships can sell those same range of models from $775 to $1,240.

Want your kid to build their confidence fast and have an easy time learning? Get this Yamaha 50 cc. It’s a great bike for very young and small beginner riders. It’s light, has a low seat, and comes with a fully automatic transmission.

Since it’s a go-to model for youth dirt riding, the PW50 has plenty of OEM and aftermarket parts. It’s also easy to maintain and cheap to repair if something breaks. It’s no surprise, Yamaha PW50 is one of the top picks for Best 50cc Dirt Bike.

Don’t expect to keep it in use for several years. The same features that make it an ideal learner bike also shortens the time your kid can use it. Once your kid can balance or control the bike easily, it’s probably time for an upgrade. The good thing? You won’t have a hard time selling it.

How much weight can a PW50 hold?

What is the top speed of the Pee Wee 50?

What is the seat height of the PW50?

Are there Yamaha PW50 training wheels?

Yes, there are several designs, and you can mount them under the foot pegs or under the frame. 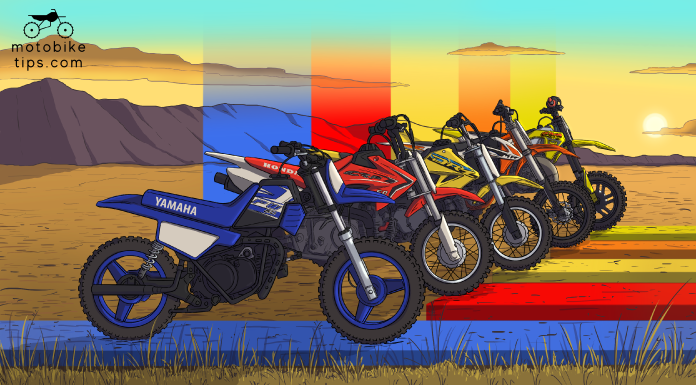